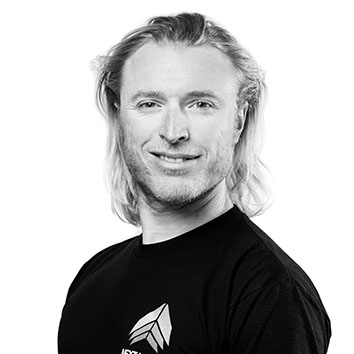 Vincent grew up in a mountain village in the French Pyrennees mountains. He always wanted to fly, and got his pilot's license at the age of 15.

After obtaining a degree in engineering in the French Civil Aviation, he started skydiving in 2005. Always wanting to be in the sky, even during his job as an Air Traffic Controller, his passion for the mountains naturally led him to BASE jumping in 2008.

Vincent pursued BASE jumping intensely for the first year. In 2009, after being hit by a train, he was hospitalized for one year and told that not only would he never run again, but would most likely have difficulty walking.

After a determined rehabilitation, he took his sports back up the following year, even hiking to some of the locations on crutches!

In 2011 (and without crutches!), some of his wingsuit BASE jumping proximity lines became a hit, likely because it was the first time such long proximity flights had ever been seen.

In 2012, he and 3 friends form the « Vercors Base Team », opening up some of the tallest high mountain BASE jumps in the world (most requiring alpine access). This created a subsequent buzz when they opened both Brevent and Aiguille du Midi (both in Chamonix), only 2 weeks apart!

In 2013, he was invited to take part in the « World Wingsuit League » championships. He made it to the finals and finished his first wingsuit competition on the podium.

Squirrel’s modern wings led him back to wingsuit skydiving. His background in speed flying, aviation, and wingsuit BASE jumping has made him an incredibly talented wingsuit instructor with a wealth of knowledge.

He is now 33 and shares his life and passion with his wife Marine, who is also a wingsuit instructor, in the French Alps.